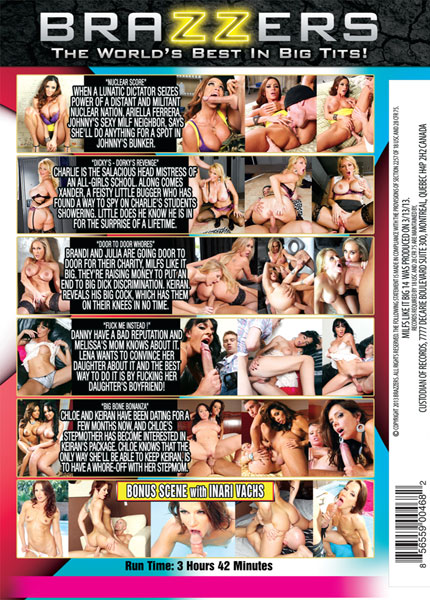 Quantity:
Price: $20.00
In stock
Nuclear Score - When a lunatic dictator seizes power of a distant and militant nuclear nation, Ariella Ferrera, Johnny's sexy MILF neighbor, says she'll do anything for a spot in Johnny's bunker.
"Dicky's Dorky's Revenge - Charlie is the salacious head mistress of an all-girls school. Along comes Xander, a feisty little bugger who has found a way to spy on Charlie's students showering. Little does he know he is in for the surprise of a lifetime.
"Door to Door Whores - Brandi and Julia are going door to door for their charity, MILFs Like It Big. They're raising money to put an end to big dick discrimination. Keiran. reveals his big cock, which has them on their knees in no time.
"Fuck Me Instead - Danny have a bad reputation and Melissa's mom knows about it. Lena wants to convince her daughter about it and the best way to do it is by fucking her daughter's boyfriend!
"Big Bone Bonanza - Chloe and Keiran have been dating for a few months now, and Chloe's stepmother has become interested in Keiran's package. Chloe knows that the only way she'll be able to keep Keiran, is to have a whore-off with her stepmom.