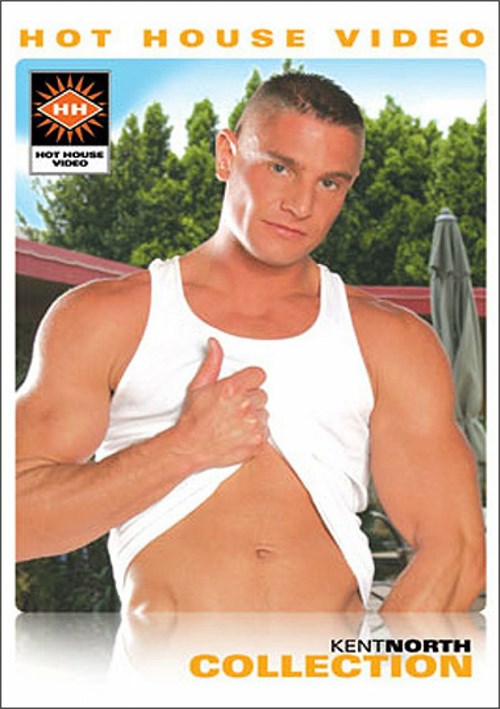 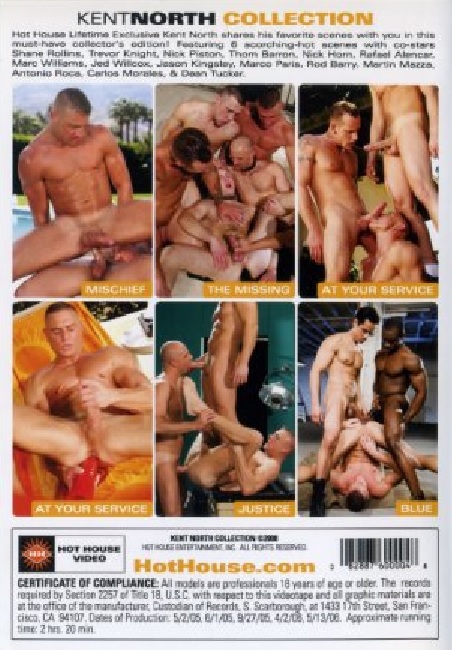 Quantity:
Special Price: $6.25
In stock
"Hot House Video presents Kent North Collection, featuring six favorite scenes in a must-have edition, including Mischief, The Missing, At Your Service, Justice and Blue. From Mischief Jed Willcox and Jason Kingsley stand over Kent North and Marco Paris as they stuff the pair of cocks down their throats while the majestic Palm Springs mountains tower behind them. Long streams of spit drools from the corner of Kent's mouth as he greedily slobbers on Jed's meaty prick.
Then Kent and Marco fall on their knees facing each other and present their butts for oral priming from Jason and Jed. The two bottoms make out while their butts get pumped from behind. They buck back onto the dicks with tremendous f-rce, hungrily trying to get all of the cocks stuffed deep inside them. Finally, both couples swap partners and turn to the camera for a double reverse cowboy position; you see both cocks slide in their holes while their own heavy dicks swing to the beat of each thrust. After some serious slamming, the four studs unload their seed and collapse in each other's arms. From The Missing Kent North regains consciousness in a holding cell somewhere in the compound; he's restrained in a full bodybag - but Rod Barry removes his hood and f-rces him to suck Shane Rollins' fat dick. In the background Trevor Knight sticks his rock hard prick up the big ass of Dean Tucker, another new addition to the compound. Nick Piston shoves his fat club in Dean's mouth, growling with his gravelly, sexy voice.
The two fuck Dean from both ends while Barry unzips Kent from his bag and puts him into full service. The hazing is a torrent of verbal assault and humiliation as the new recruits choke on the giant cocks and gasp for air through their pinched noses. The studs line up to gangbang Kent, fucking their new toy without mercy and causing Kent's body to shudder from misuse. Dean is next as Trevor and Rod rip him a new asshole with a vicious double-penetration followed by an enormous black dildo. The scene ends in an explosive release of thick cumshots just as The Abductor suddenly appears, collaring Kent and ordering him to be brought to dinner as his slave. From At Your Service Nick Piston and Thom Barron haven't been quite satisfied with the conditions at Collingwood Manor. They corner their host, Kent North, and demand that he make it up to them by shoving North to his knees and feeding him their fat dicks. Piston takes Barron's huge piece to the base in an impressive deep throat job while North eats Barron's enormous ass and balls. Next, North rides Piston's hard cock until he's loosened up enough for an incredible double-penetration by Piston and Barron.
These are two of the fattest cocks in the business and North stays the course as they double-stuff his ass from the rear. After Barron and Piston shoot their loads all over North they agree that the service at Collingwood Manor is beyond compare after all. From At Your Service Kent is tidying up pool side when he discovers two very large dildos under a pile of towels. Realizing that he has a minute or two to himself, he immediately undresses and lubes his hole. Using his own fist, he stretches his hole until it can accommodate the first toy - a 12"x7" latex cock. North pushes it in to the base, pulls it all the way out and shoves it back in effortlessly. The feeling makes his huge cock rock hard, which he strokes as he works his greedy hole. Next up is an even bigger red dildo, about 14"x9" at the base. He hungrily shoves the monster up his ass, riding it until he shoots hot cum all over himself.
From Justice Toby's lawyer has him sent to the infirmary where the doctor (Kent North) tells him there's nothing he can do for him and sends him back to his cell. In the meantime, the orderly (Carlos Morales) ushers in a new patient (Nick Horn) who has a pain in his groin. Nick lies down on the examination table and when the doctor pulls his pants down to take a look, out pops the problem - and it's a big one at that. Carlos immediately assists by placing his mouth firmly around the prick and sucking it to the base; before long, Nick has both Carlos' and Kent's mouth servicing his dick and balls with their wet hungry mouths. Nick stands up and Kent drops to his knees to service both big fat pricks at once - but he wants more. He soon bends over to take Carlos' big fat cock up his ass while Nick slurps on the hard dick dangling between his legs. They switch, flipping Kent on his back so Nick can get a shot at banging the doctor's tight hole. The three continue to flip-flop fuck each other, even piston-fucking
Kent's enormous, greedy butthole with an 18-inch dildo. From Blue Kent gets his fill when he takes on horse-hung stallions Marc Williams and Rafael Alencar. Alencar stands in front of North, ramming his massive rock-hard cock deep down his throat while Williams and his thick slab power-fuck North's greedy hole. Both horse-hung tops want to shove their meat deep into North's hole so they throw North on the ground and roll him over onto his shoulders. At first they take turns, shoving their clubs in deep, one at a time. Eventually both massive cocks slide into North's ass. Williams and Alencar show North no mercy as they punish his hole until they both shoot hot loads all over North's gaping manhole."

The Road To Hopeful