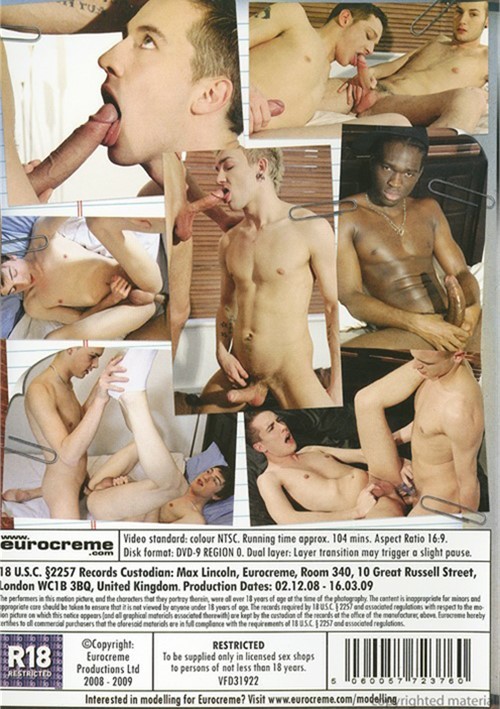 Quantity:
Price: $20.00
In stock
Porn Academy opens its doors once more, showing the freshest new talent being put through its paces. Young N' Hungdoes exactly what it says, the "students" are young, smooth and fuck-able to the point of exhaustion, and the dicks, well they're certainly filling! Cock hungry bottom boys are fed lengthy meat and the smooth tight butts are worked on with real dedication from these ceaseless fuckers. Standing out, Shane Stone - a familiar face on the scene, works his magic on indie twink Seth; the intensity of the sex blasts out of the screen at you, the ass slamming action will leave you feeling truly spent so imagine what poor Seth felt like after his first time in front of the camera! Hung lads jerk off now and again, including the hot black kid Nico with a weapon North Korea would be proud of. Not forgetting Danny, the sexy Northern boy enjoying his versatile session, there's just too much mention!
Buff young hunk Alex leads us right into it as he strokes his smooth chest, bulging abs and teases us as his hands caresses his football shorts, getting harder and harder under them, stripping off his vest, exposing a dream body, it's a shame we don't see more of his legs, strong hairy slabs of meat from the snapshots we're given. Pulling out his handsome dick, he jerks hard, working all the blood into his shaft, getting himself pulsating and working to a real blast of spunk, spraying his slightly sweaty body in streams of cum, don't miss the cheeky grin at the end, this lad loves showing himself off!
Big dicked Danny shows us his fully versatile side when he teams up with Kristian, both meaty dicks getting the full tongue workout dicks like that deserve, Danny's long shaft getting the most attention, and it's easy to see why! Perfectly shaped and sized, the young fucker is a great package, and his ass isn't too bad either! Giving Kris a face fucking, before sliding his entire length into his fuck buddy friend, fucking him solidly, his balls slapping against ass as Kris jerks himself, loving the feeling of Danny deep inside him, pounding away. Eager to repay, Danny flips and holds himself over Kris, giving us one of the best views possible of a cute twink getting fucked by a big dick, staying rock hard throughout as he bounces willingly on top.
Ultimate twink boy Troy and smooth, sexy Leo get down and dirty as they tease each other with their tongues, lapping up any dribble of precum from their rock solid dicks. Leo gets the pleasure of Troy's impressive cock slamming his butt, all but moving the bed along with each powerful thrust from his hips, getting himself deeper into the young lad's ass. Unable to continue without squirting his load, Troy jumps up and dumps it all over Leo's handsome face as this tips the recipient over the edge, causing his balls to explode with their own load, coating the bottom boy from head to toe!
Huge, thick and totally tasty, Nico gives the stereotype an added confirmation, as this defined black kid sports an almighty dick like you've never seen before! As thick as it is long, Nico proudly shows us wanking himself, getting and staying rock hard, his young smooth body heaves as he gets himself worked up, sliding his foreskin over his throbbing helmet, it would be awesome to see him fuck a tight white boy, but maybe another day! Watching him erupt spunk, he lets it dribble down the length, tempting us to reach forward and almost lick his still throbbing shaft clean!
Showing sexy young Seth the ropes, Shane treats him to his famous dick that never ever does down! This super horny, ceaseless fucker loves nothing more than getting his hot cock out and slamming into face and ass, getting it worshipped as his defined body tightens with every thrust forward. Seth's enjoying every second of his face fucking, his dick as hard as a nail, and when his totally smooth pink hole gets licked, ready for Shane's dick, it couldn't be hornier to watch! Opening up the young lad, Shane preps him for the full thickness. Giving us the full close-up action, Shane fucks the twink from below, slamming it home, right up to his sweet balls, groaning at the great feeling, you'll be rock hard and pumping along with them, that's for sure! The sheer intensity of this fuck sesh will leave you and them breathless; the fucking is so hard and so hot, Shane has reached new levels and shows himself to be a true star of sex!
Fucking Kaden's face throughout, hung rude boi Jason stretches this power bottom wide open with his fingers, as he gets sucked, feeding the passive guy from both ends! Not content with just fingers though, the dildo quickly comes out, lubed up and plunged straight into him, working up to total depth in seconds, Kaden really is a pro at taking it up the backside! Aching for the real thing, Kaden bends double and Jason is ready and raring to go, slipping it in fucking hard as Kaden is forced to take all he's given, moaning out as his ass is well and truly used. Coating his tongue in fresh warm spunk, it slides down Kaden's throat, proving he's just as hungry for spunk, as he is for cock